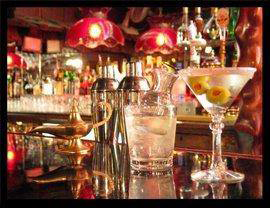 The Magic Lamp Inn – one of California’s original steakhouse – has served for over half a century as a friendly and comfortable outpost for diners on Old Historic Route 66.

In the 1940’s and early 50’s, it was Lucy and John’s Cafe, owned by the Nosenzo family, featuring Italian cuisine. After the Nosenzo’s sold the restaurant to Frank and Edith Penn and the Clearman family in 1955 guests no longer found themselves eating spaghetti. Instead, they ate steak and chicken inside the newly remodeled restaurant. Travelers were welcomed with a large “Magic Lamp” at the entryway.

The Magic Lamp Inn name was selected from a lottery drawing by the staff.

In 1975 the previous owner, Anthony Vernola and his family bought the restaurant from the Penn’s

The wooden beams inside are Chinese Cherry Wood and the Stained-glass windows were imported from Europe and other parts of the globe. The jagged roof is made of odd Bricks and Spanish Tiles that usually are not used for tiling. Adding the Cedar Shakes and Mock Bavarian/Tyrolean facdades give the dining and lounge areas a warm rustic feeling.